We use cookies to provide you with a better experience. By continuing to browse the site you are agreeing to our use of cookies in accordance with our Cookie Policy.
Skip To Content
Home » As demand for oat milk increases, oat supply wanes due to drought, demand

As demand for oat milk increases, oat supply wanes due to drought, demand

KANSAS CITY — Oat supplies in the United States for the 2021-22 marketing year (June-May) are forecast to be the lowest on record. CME Group nearby oat futures are record high. Food-grade oat flake prices as reported by Sosland Publishing Co. in mid-October were up 62% from a year ago.

While many industries are experiencing COVID-19 related shortages, the dire oat situation mainly is a factor of basic supply-and-demand. Major oat growing areas in the United States and Canada were impacted by drought during the 2021 growing season. At the same time, demand for oats has been climbing due to its long-recognized health benefits, popularity in snack products and most recently — oat “milk.” And the strong demand season for oats as a hot breakfast cereal — oatmeal — is about to arrive.

“Demand for oats and processed oats products has seen good growth over the years, but in the last year that has escalated with demand for oat-based dairy alternatives,” said Steve Eilertson, president and chairman of Grain Millers, Inc., which has plants in the United States and Canada.

Oat milk sales have risen about 70-fold since 2017, account for 16% of non-dairy milk sales (more than soy, rice and coconut milk combined), and are second only to almond milk, Bloomberg noted in a recent article. New oat milk plants are being built, adding to demand for the scarce commodity.

“The oat has a humble history as a staid breakfast choice in the form of oatmeal or cereal,” Bloomberg said. “But more recently it’s become a trendy darling of millennials. Food companies targeting younger, more affluent consumers are billing it as an accessible superfood.”

US 2021 oat production was estimated by the US Department of Agriculture at 39,836,000 million bus, down 39% from 2020 and the lowest in records back to 1866. Oats outturn in the four largest-producing states (Minnesota, North and South Dakota and Wisconsin) was down an aggregate 58%. 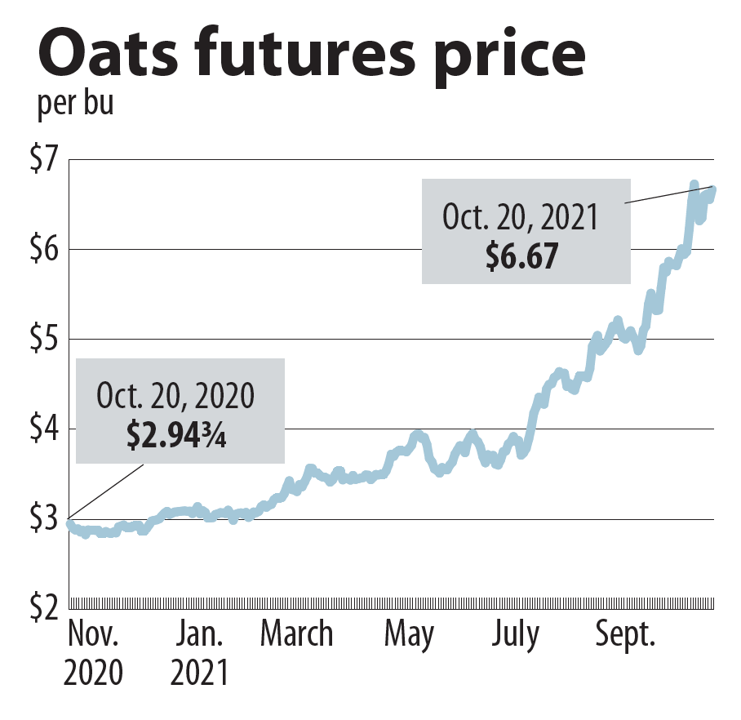 “We came into the year with low stocks,” Mr. Eilertson said. “We needed a good growing season to build stocks back. And we know what happened: production approaching half of what was needed. Much of this deterioration happened late in the growing season and really caught a lot of people by surprise.”

US oats primarily is used as a feed ingredient with US millers highly dependent on imports from Canada, where 2021 production was estimated down 44% from 2020 and an 11-year low. Canada typically is the world’s largest oats exporter.

CME Group nearby oats futures closed at a record-high $6.62 per bu on Oct. 18, up about 125% from a year earlier when values were below $3 per bu. Oat futures typically follow corn futures since corn is the most widely grown feed grain. Oat futures prices have topped corn futures briefly only a couple times in the past decade, until this fall when oats futures have at times been more than $1 a bu, or about 20%, above corn.

Food-grade oat flake prices were quoted by Sosland Publishing Co. at about $45 per cwt in mid-October, also record high.

Spot oats prices already were $8 a bu f.o.b. in the United States and $10 in Canada, he said, with oat flakes headed to $50 a cwt. “I would expect the price would ultimately ration demand.”

“The drought in the United States of 1988 is the last time the market was severely short oats and was able to source a significant amount of oats from northern Europe,” Mr. Eilertson said. “The EU oat market should have some oats to export to North America. Will it be enough to help us get to new crop? That is the question.”

Production of oats in the United States has declined for decades as demand for the grain as horse feed has declined and as other crops were much more profitable. Whether growers will respond to high oat prices by planting more oats in 2022 depends on where oat prices are closer to planting early next spring and on prices of competing crops, which have been elevated as well, especially in the Upper Midwest and Canadian Prairie oats growing areas.

“Plant oats; get rewarded,” Mr. Eilertson said. “For oat-based ingredient buyers, it will be a year that will come with challenges but know there will be a light at the end of the tunnel – a new harvest.”