We use cookies to provide you with a better experience. By continuing to browse the site you are agreeing to our use of cookies in accordance with our Cookie Policy.
Skip To Content
Home » Companies find ways to help their cheeses stand out

Companies find ways to help their cheeses stand out

CHICAGO — More than 95% of US households purchase cheese, according to Chicago-based IRI, with the leading format, shreds, representing almost a third of dollar sales. While there’s no way to quantify how those shreds are used in consumers’ kitchens, it’s a safe guess most of them are ingredients in recipes ranging from pizza topping to casseroles to tacos.

With the pandemic fueling consumers’ desire to experiment in the kitchen, cheese marketers have tried to differentiate their ingredient cheeses through combination products, application-specific blends and even virtual cooking classes. Many of the products now are appreciated for their answer to that age-old question: What’s for dinner?

“Following 2020’s accelerated category growth (of retail cheese) brought on by pandemic circumstances, 2021 category sales were tempered yet still positive, reflecting both the lingering nature of the pandemic’s impact balanced with, for many, a return to some old routines, including increased out-of-home activities,” said Billy Roberts, senior analyst of food and drink for the market researcher Mintel, Chicago. “Segment performance is disproportionate, with the natural and cream cheese segments continuing growth, while processed and cottage cheese have dipped back into negative territory. Volatility in the supply chain and rising food prices make this an important time for cheese brands to connect with consumers.”

The pandemic led to double-digit sales growth of retail cheese in 2020, according to Mintel’s “US cheese market report 2021.” While that growth slowed in 2021, sales still outperformed the previous year. The biggest challenge to the cheese category may be one of its biggest strengths, namely that only 5% of consumers are unengaged with the category, Roberts said. That leaves cheese brands with little choice but to increase frequency or usage occasions, and recent innovations are doing just that.

FrieslandCampina, Paramus, NJ, has been busy working with influencers to educate consumers about how to cook with specialty cheeses. The company partnered with Jen and Jamey’s Virtual Cooking Classes to teach people that creating great cheese-centric cuisine can be fun and easy.

In November 2021, the company hosted an interactive, one-hour virtual holiday cheeseboard class during which hosts Jen and chef Jamey created a charcuterie board. All supplies were shipped prior to the event, including an array of FrieslandCampina’s Dutch Masterpiece branded cheeses.

Another event in February kicked off the introduction of Gayo Azul Cotija cheese. Gayo Azul, a brand of Dutch-influenced Caribbean Hispanic cheeses, has a sharp, slightly salty flavor with a firm, crumbly texture. Jen and Jamey showed participants how to use the aged cow’s milk cheese in street corn, guacamole and chicken enchiladas. The cheese is being distributed to retailers in 8-oz wedges. 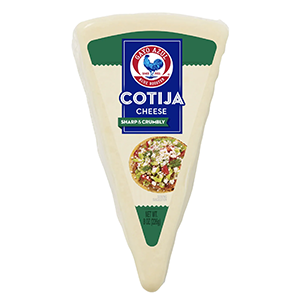 The charcuterie class inspired FrieslandCampina to create Royal Hollandia Entry Packs. The company offers six charcuterie-centric cheeses in 3.5- to 4-oz packs, which invite consumers to purchase a few options without committing to the typical larger-size chunk.

The cheeses come in shelf-ready packs designed for easy merchandising in the deli with marketing language of “pick and mix.” Each individual pack includes information about the cheese’s flavor profile and suggested pairings. The company now includes such details on most of its cheeses as part of a rebranding and new product rollout program.

Dutch Farms Inc., Chicago, also has a macaroni and cheese blend, which combines American, sharp cheddar and Swiss cheeses. American is a processed cheese. The low-melting, emulsified, homogenous cheese contributes to a smooth, creamy texture when melted into a pasta sauce. That’s the same science behind Kraft Creamy Melt shredded cheeses, which combine Philadelphia brand cream cheese with natural cheeses such as cheddar and mozzarella. As of Nov. 29, 2021, the Kraft brand of cheeses is part of Lactalis Heritage Dairy, a newly formed division of Lactalis, which has its North American offices in Chicago.

Plymouth, Wis.-based Sargento Foods has taken a different approach to make its cheeses melt more consistently and creamier. The cheesemakers add extra cream to the milk before the curds coagulate. The higher fat content yields a smoother, easier-to-melt cheese.

Some cheesemakers have eliminated the melt in order to offer dairy-based “patties” for flexitarians seeking non-meat burgers. Such no-melt cheeses are not new and in several countries they are part of traditional cuisine. Think Indian paneer and Greek halloumi. They are fresh, semi-firm and made with cow’s, goat’s or sheep’s milk, alone or as a blend. The cheese doesn’t melt due to the protein structure, with moisture, salt, fat, age and acidity all having an impact. They are vegetarian friendly. Like other cheeses, milk is the main ingredient.

Some cheesemakers are taking no-melt cheeses to the next level and offering them in grill-ready forms, which include being marinated with seasonings and oil. They are formulated to be heated directly on the grill, just like a burger, with the cheese developing a char-grilled, golden crispy outside and a warm and creamy soft inside.

Fighting food fatigue is one battle, but for the very social, remembering how to entertain is a skill that may need to be relearned post-pandemic. Kansas City-based friends Janine Akers, DeAnne Dodd and Shelley Reed were feeling that way in the summer of 2021, so they partnered to form Artful Apps and then developed Crackerology Cracker Kits, a line of convenient appetizers. The all-in-one kits were created so everything needed to make 24 appetizers is included in the box and may be put together within minutes.

The four savory varieties all include shelf-stable, dairy cheese from Dairyfood USA, Blue Mound, Wis. Wine & Rosemary contains savory, buttery crackers with a touch of red wine, rosemary and a hint of pepper, along with cheese schmear, preserves and a savory nut topping. 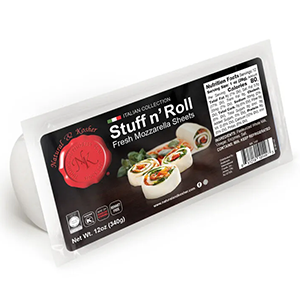 Such shelf-stable products are processed cheeses formulated to be safe when held at ambient temperature, which makes them suitable for being packaged as an ingredient in such kits.

Anderson International Foods, Jersey City, NJ, is assisting in the entertaining department with the introduction of Stuff n’ Roll, which is a sheet of fresh whole milk mozzarella that may be filled with ingredients to create healthy, low-carbohydrate snacks or upscale hors d’oeuvres. The company also plans to introduce the Brigitte’s Spirit line of brie, which comes with an accompanying layer of fruit (apricot, fig or guava) paste for easy plating.

Everything tastes better with cheese

Cheese adds flavor, color and visual appeal to all types of foods. It also contributes important nutrients — most notably protein and calcium — and in some applications, functionality, as it provides a cohesive mass to bind other ingredients, including vegetables and seasonings.

With hundreds of varieties of cheese to choose from, it’s fairly easy to get creative and provide consumers with a culinary adventure.

Choosing the right cheese is as much about taste as it is performance. When microwaving a handheld sandwich, the cheese must stay inside the pocket. An alfredo sauce in a frozen pasta entre must not separate or form a film after heating. And in a baked cracker, the cheese flavor must be identifiable.

Many recipes rely on enzyme-modified cheeses. Known simply as EMCs, the ingredients are concentrated cheese flavors formed by the enzyme-catalyzed hydrolysis of cheese curd. The result is a viscous slurry that has as much as 10 times the flavor of the original cheese. They provide the option to reduce or replace dairy commodities for cost savings while increasing overall flavor impact and consumer-perceived product quality. They have low usage levels and allow for claims such as “made with real cheese.”

These emulsions are typically heat stable; therefore, they do not lose their strength during processing or reheating. Because they are made from real cheese, they also provide authentic mouthfeel and aroma.

Processed cheeses are also often a go-to for food formulators who want to add cheese flavor but do not want to deal with the inconsistencies of using natural cheese, which is a living product until heated. Processed cheeses are designed to have a controlled, creamy melt with no separation or stringiness.

Another option is restricted-melt processed cheeses, as well as no- and low-melt natural cheeses, such as feta, halloumi, queso blanco and paneer. These cheeses are useful as inclusions in everything from sausages to bread. These cheeses get creamier when heated, rather than oozing and losing form.