We use cookies to provide you with a better experience. By continuing to browse the site you are agreeing to our use of cookies in accordance with our Cookie Policy.
Skip To Content
Home » Sustainability, ingredients, animal welfare bring organic products to forefront

Organic means different things to different people. For the farmer it means sustainable practices, simple ingredients and animal welfare. For the consumer, it means a product that is healthier for the body and for the environment. For others, the definition of organic means something entirely different.

In agreement with the USDA Economic Research Service, it is generally believed in the marketplace that consumers prefer organically produced food because of concerns regarding health, the environment and animal welfare, and they show a willingness to pay the price premiums established in the marketplace. That being said, organic products have shifted from being a lifestyle choice for a small share of consumers, to being consumed, at least occasionally, by a majority of Americans.

According to IMARC Group, the organic dairy market in North America reached a value of $8.7 billion in 2020. Looking forward, IMARC expects the market to exhibit moderate growth moving forward.

Organic dairy products are procured from livestock which is raised through organic farming methods. In comparison with the conventional dairy goods, these products are preservative-free and rich in antioxidants, vitamins, omega-3 fatty acids and conjugated linoleic acid (CLA).

Additionally, these products claim to offer a number of health benefits such as boosting metabolism, strengthening immunity, reducing muscle and joint pain and minimizing the risk of cancer and heart diseases.

In 1985, Jan and Rinske de Jong, came to the land of opportunity from Holland, with a dream to start a dairy of their own.

The de Jong’s started milking 180 cows for a dairy farmer in Cottondale, Fla. After several moves, Working Cows Dairy relocated to Slocomb, Ala., in 1991 to the farm where they still operate today.

In October 2006, the de Jong’s made the decision to go into the “niche” market of organic products and transitioned their land and cows. Since November 2009, all cows and land have been Certified Organic.

“We had a contract with a big organic processor, and after a few years, they could not pay us any more for organic milk (they really had thought more dairies would move to organics),” Rinske de Jong said. “At that time we switched from being a grain-fed dairy to an Animal Welfare Approved, 100% grass-fed dairy.”

“First, it was just whole milk gallons and half gallons, and a little later also chocolate milk,” de Jong said. “About two years into it, we started to separate our milk and offer heavy whipping cream, 2% and fat-free milk too.”

The de Jong’s finally put their money into a cheese plant in 2016. Rinske started to make her first cheese in February 2017.

“For the first couple of years, we made raw milk cheeses, and later pasteurized milk cheese,” de Jong said. “We loved this cheese and learned that we could send in a sample for a competition for the Good Food Foundation.”

“Grass-fed milk is always a healthier choice because cows turn grass into the essential vitamins A, D3 and K2,” de Jong said. “During low-temperature vat pasteurization, our milk is only heated for the minimum temperature and time allowed for Grade A dairy so it retains complete proteins, Omega-3 fatty acids, calcium, trace minerals and fat-soluble vitamins our bodies need to stay healthy.”

Working Cows Dairy sells its milk and cheese at the dairy’s location in Slocomb, at select markets throughout the country and online. Working Cows Dairy products are also sold via Farmers & Fisherman Purveyors delivery service in Atlanta.

“Organic means back to being a small family-operated, grass-fed farm, where cows can just freely roam the pastures and have quality of life,” de Jong said.

Raw Farm has been making raw dairy products since 1998.

Over the past two decades, the Fresno, Calif., dairy has taken great pride in its focused mission to bring tested, organic, raw dairy products across the United States.

“We take the most important food designed for humankind and meticulously craft it (but not alter it) so that consumers can enjoy each savory and rich flavor,” said Mark McAfee, founder and president of Raw Farm. “Our raw milk from grass-grazed cows (365 days a year) is the most organic way dairy products can be produced. Our mixed herd grazes in mobs, just as they have naturally grazed since primal eras. The flavor from this style of mob grazing is noted in the creamy textures of our products.” 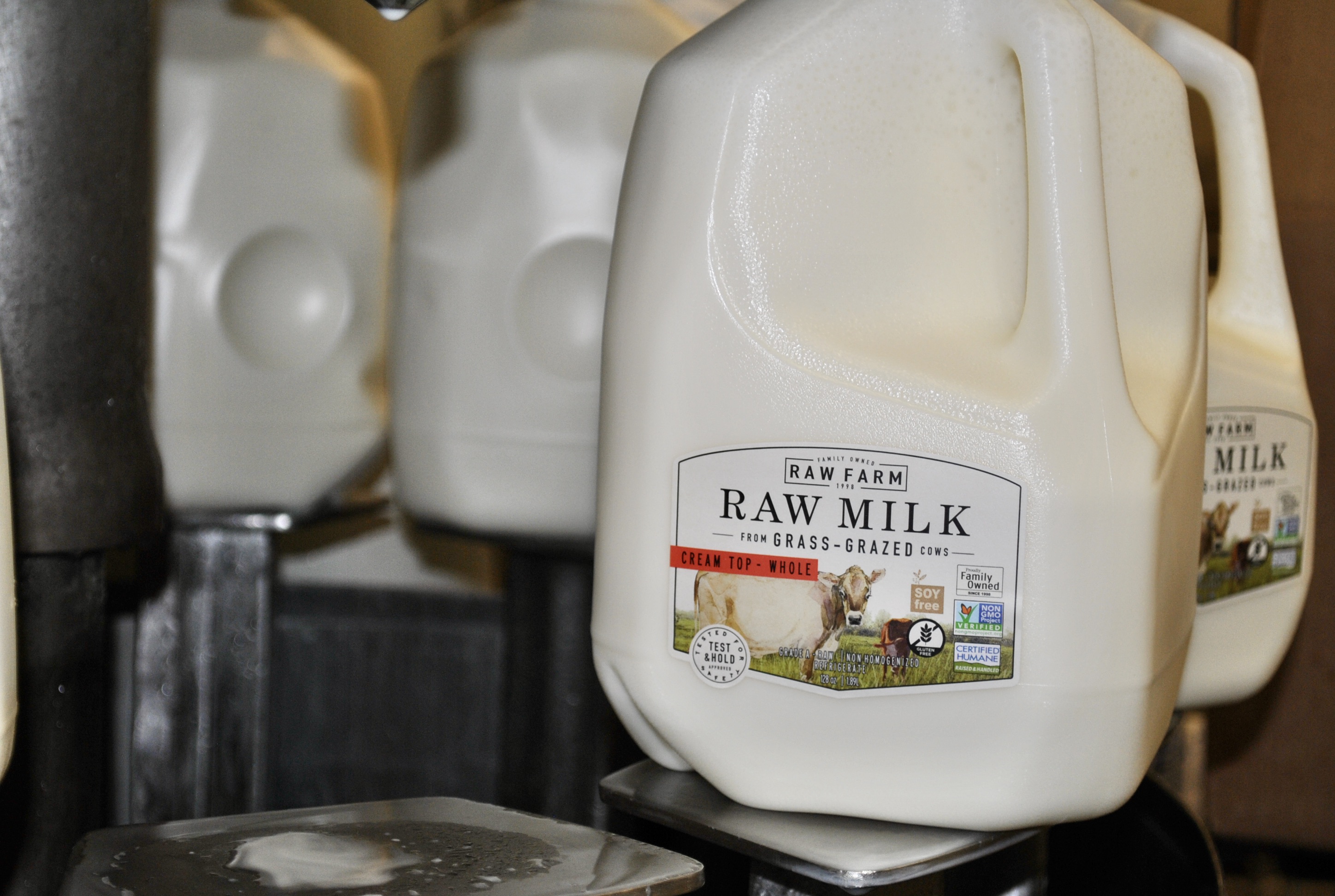 “Our brand is not in the mainstream organic movement,” he said. “We are leading it and conduct the charge in a completely different way. Hybrid organic serves people.”

Raw Farm began as a response to consumers who reached out to them and wanted their raw milk organic and unprocessed, McAfee said. “So, we listened to those customers and embraced the challenge,” he said.

McAfee has spent the last 10 years attending and supporting the work at the International Milk Genomics Consortium at UC Davis. They study breast milk down to the proteomic and genomic level.

“We do dairy different, so that all of the nutrient-dense wholeness is unchanged by processing.”

McAfee said Raw Farm has pioneered testing and food safety to assure that the risk in raw milk is very low.

“Daily testing for coliforms and the most important pathogens is what we do to assure safety,” he said. “Organic means alive, active, biodiverse, vibrant and whole. To us, and our customers, that is what raw milk means.”

“We sell in 632 stores in California with raw milk, raw butter, raw kefir and raw cream,” McAfee said. “We sell our raw cheeses in another 1,500 stores nationally including Sprouts, and HEB in Texas, and many others. Whole Foods is approved for our cheeses, but we had a fire in our plant in early January, and we had to build back our 60-day aged inventories. Our cheese will be back in Whole Foods mid-March.”

Raw Farm gets ahead of emerging trends, especially when it comes to health and nutrition, by truly listening to consumers.

“If you listen to people closely, the customer will tell you everything you need to know,” McAfee said. “We decided long ago to connect directly to customers and listen intensively to the feedback. This communication has served us well.”

The Real Organic Project is a farmer-led movement created to distinguish soil-grown and pasture-raised products under USDA Organic. In response to the lack of enforcement of some vital USDA Organic standards to protect soil health and animal welfare, organic farmers have rallied together to fight to protect the integrity of the organic label.

The Real Organic Project was started by farmers to protect the meaning of organic. They grow food in the soil, not hydroponically. They raise livestock on pasture, not in confinement. In this time of concern about the erosion of integrity in the USDA, Real Organic aims to stay true to what organic is intended to be.

According to the organization’s website, “Organic farmers have long known that healthy soil creates nutritious food, healthy people and a healthy environment. This leaves us to wonder, what does USDA Organic mean now? How can we protect the movement that organic family farmers have built?”

To learn more about the movement, visit the Real Organic Project's website.